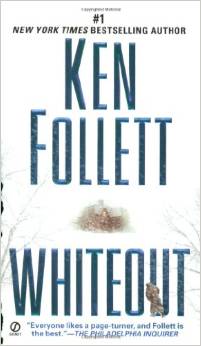 Let’s imagine Mr. Follett as an undergraduate student bringing the manuscript of Whiteout to a professor in his university’s writing program.

“I’d like to use it as part of my coursework on editing if you don’t mind.”

“The more visibility the better, sir.”  Follett blushed with pride and became more erect.  “What was it you liked most?”

“Many features, really, but for the purposes of this conversation let’s say six.  In order of their frequency of appearance I loved the Tom Swifties, the seems, the show-don’t-tell, the suddenlys, the POV shifts, and the repetition.”

“Not sure I catch your drift, sir.”

“Here. ‘What the hell is this, Kit said, worriedly.’  ‘I’ve invested everything in the firm Stanley said grimly.’  ‘I’m watching a film Sophie said sulkily.  This is cool Sophie said excitedly.’  ‘Knock it off you two’, Nigel said calmly.’”

“I particularly love –ly adverbs when they follow a speaker attribution which already explains the character’s feelings, such as ‘I’m fine, Daisy muttered angrily.’”

“The next batter is show-don’t-tell.  When you say, for instance, ‘Come on, Daddy,’ Olga said.  She was furious, because she had been called a mercenary, and she needed to counterattack,’ it effectively interrupts the scene to explain to a reader what’s happening.  That’s patronizing.  It’s as though the director of a play ran out onto the stage and explained to the audience what happened in the last scene.”

“Let’s just say that if you took out the telling, your books would be a lot shorter.”

“Unless I replaced the telling with showing, right?”

“The next batter up is seems or seemed.  How do these sound to you, Ken?  ‘She seemed to consider him beneath her romantic notice.’ ‘Her heart seemed to go cold.’ ‘His ears and nose seemed frozen.’ ‘The light seemed to appear in the corner of his eye.’ ‘She seemed fast asleep.’”

“Hearing them together like that, sir, it does sound silly.  In each case there were better ways of saying it than using seemed. Maybe like just dropping the seemed altogether, right?”

“If you dropped the Tom Swifties, the telling, and the seemed, you might be charged with writing literary fiction.”

“A scene on page 352, for instance starts out, ‘Tony stopped to look at Daisy.  She seemed to be out cold.’  Then, in the same scene, just a few lines later, ‘Kit started to run away…he seemed to realize that he could not escape that way.”

“Gotcha, sir.  Inside two characters’ heads in the same scene might be confusing.”

“In another place you say, ‘They went with the boy back to the house, not speaking, both embarrassed.’  To know two characters feelings the reader would have to be inside both of their minds simultaneously.”

“Another thing, Ken.  After you finish a manuscript, use the find feature to locate and eradicate the word suddenly.  It’s overused by amateurs and never used by professionals.”

“I probably use it, right?”

“Only three times in 374 pages, but wholly unnecessarily.  ‘Caroline suddenly said, ‘Oh God,’ I’m so creepy.’  ‘Then suddenly both Daisy and Nigel were holding guns.’  ‘The Jaguar stopped suddenly.’  Again, Ken, in each case a less amateurish construction could be used.”

“I could have said that the Jaguar stopped abruptly, or with a screech, right?”

“Then there’s the matter of repetition.  You mention Kit’s distinctive jewelry four times.  You describe twice the detail of how the air locks work in a bio-security lab.  You mention the patterns on the children’s pajamas a half dozen times.  You have the mother using dimwit language every time she speaks.  It gets tiresome, Ken.  Oh, and having to explain a dozen times why each character’s cell phone doesn’t work?  Why not just have Inverburn be a bad signal area and be done with it?”

“But aside from all that you liked it, right, sir?”

“Wonderful, really.  Though I might not have a former cop aiming to wound a perp with a gun pointed at her.  I wondered why Kit had to admit he’d been outside at all, since no one had seen him leave or return.  I might not have had the grotesquely maimed Daisy regain conscious only to ask about the teenagers’ sex lives.  I might not have referred to a tail number on a helicopter since they don’t have them.  And I might not have even the dumbest perp carry around a deadly virus in a perfume spray bottle.”

Postscript.  Mr. Follett went on to sell 130 million copies of his novels.