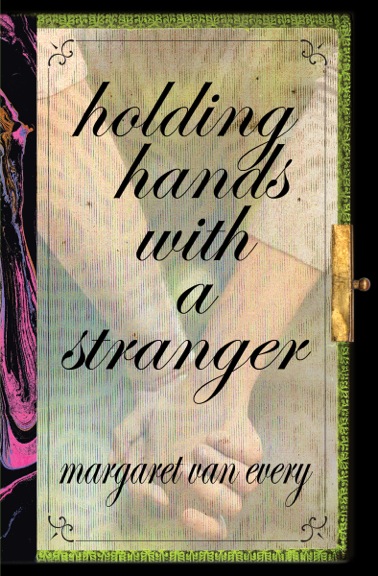 HOLDING HANDS WITH A STRANGER

Japanese innovators love to claim ancient precedent: when introducing a new, Western-influenced form of short poem, the modernist poet-critic Masaoka Shiki (inventor/pioneer of the word haiku) revived the word tanka, a name for short poetry of the 700s.  While modernist  tanka did not break with tradition formally, still retaining the five-line, 31-syllable requirements of the past, Shiki encouraged the new poets to reject “the puns or fantasies often relied on by the old school” in favor of Western-inspired “realistic observation of nature.”

With elegance and vivacity, Margaret Van Every contributes a new work to the growing body of tanka written in English.  Abandoning the syllable-per-line requirements of the Japanese form, her tanka are nonetheless five-line poems of thirty-one syllables or fewer.  Although, in keeping with Shiki’s ideals for the form, Van Every draws on life experience as her source, instead of the natural landscape, she explains in her introduction, she has taken the “social landscape” as her subject.  Readers tempted to take Van Every to task for making human passion rather than natural imagery the core of her tanka would be advised to read Akiko Yosano, whose willful, feminine voice I hear echoed in Van Every’s work.

Van Every begins her book with poems of youth and self-definition, telling elliptical, telegraphic stories of rebellion and discovery, such as:

play with all the toys

but never touch his tools:

Self-definition can sometimes tip into self-mythologizing, and certain of the poems in this section can leave the reader wondering whether to wince or cheer:

where the lady clothes

The second section of this book centers on Eros in a voice that is frank, ripe, and earthy, reveling in the kind of incongruous immediacy that the best of tanka and haiku have to offer:

but we two in a dinghy

and on the bank six curious cows

while we squander our longing

The third section of this book deals with time and the body’s frailty, delicately and compassionately invoking beauty and melancholy, tragedy and humor:

to a lustrous shine

I think of her;

the gardener is barking

he makes us feel protected

while he tends our flowers

The fourth section of this book confronts death with the same frankness Van Every brings to sex, in poems that capture both the gravity and the absurdity of what it’s like to be in a body.

as though making a selection

from a sushi menu

Van Every brings her winning combination of reverence and earthy humor to the last, most mysterious section of this book, in which she considers the nature of writing itself: is it the spontaneous relief of an urge?  Or a deliberate attempt to forge a legacy?

others walk their dogs

while I am walking thoughts;

when I can’t contain them

I stop at a tree, unload a poem

Van Every excels at tanka that marry what Shiki thought of as both old and new schools, poetry that relies both on allusion and on crystalline observation.  In the poem that offers the title of this volume, she compresses the whole world of a marriage—and the passions that travel alongside it—into thirty-one packed syllables:

in the darkened hall

the stranger on my left

throughout the Ode to Joy

as husband dozes on my right

A startling snapshot of a moment in a life, this image deepens into a resonant comment on the purpose of poetry, and, in the note to the reader with which Van Every opens this volume, offers its lasting truth: “Who is the stranger with whom we all hold hands?  …It is the poet whose hand you hold as you read this collection.”