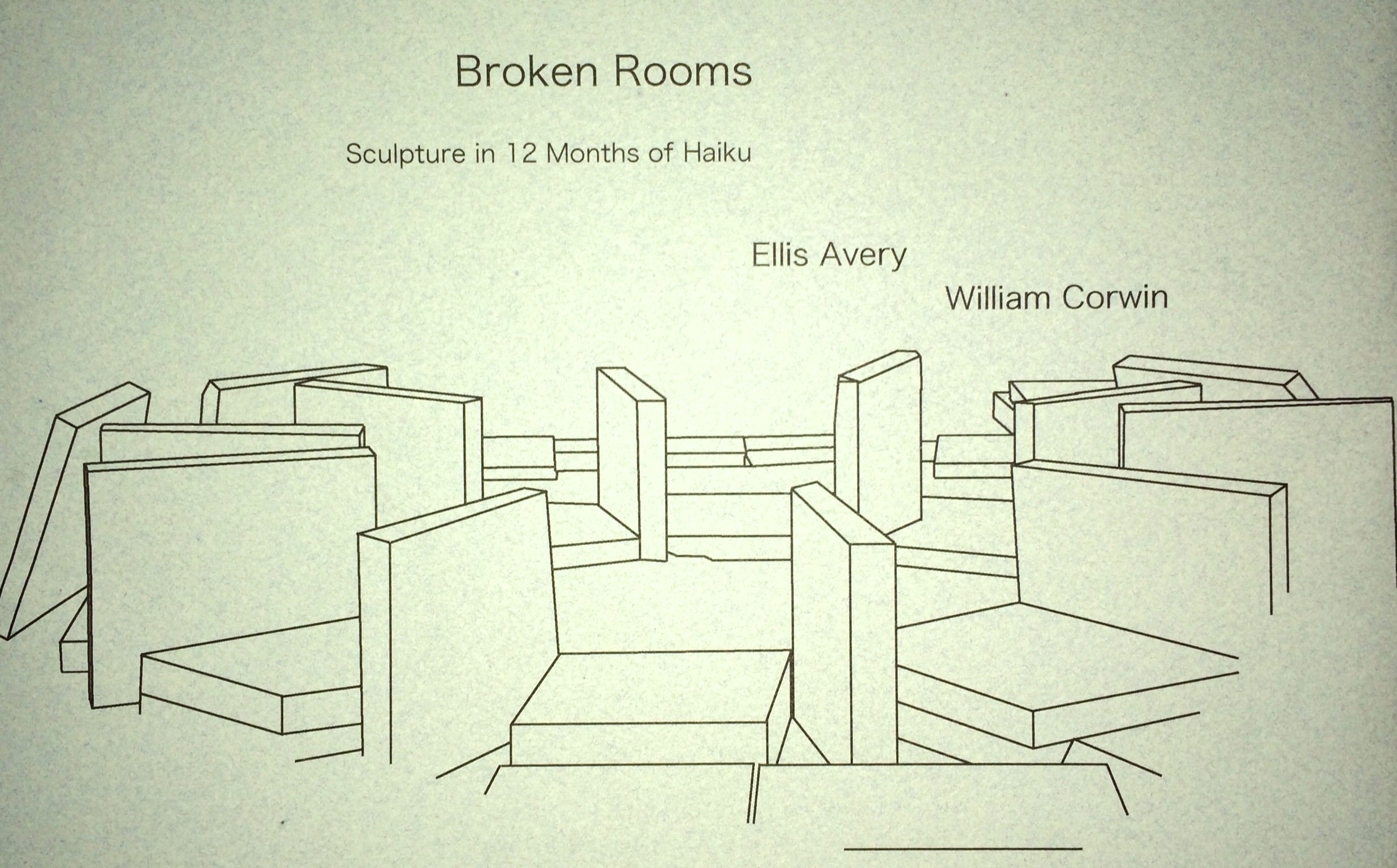 Review of Broken Rooms by poet Margaret Van Every

There has been a recent trend in the US to urbanize the ancient Japanese short forms of poetry, e.g. tanka and haiku, and Ellis Avery has successfully done this in her collection of haiku entitled Broken Rooms.

In this slim volume she has teamed up with sculptor William Corwin whose hard-angled images of urban decay redeemed by light complement the theme of the book. This pairing is a novel idea that works well in providing a contemporary feel and atmospheric support to the haiku. The sculptures are abstract assemblages of plaster walls that have fallen gracefully in the demolition of an apartment. We are reminded that buildings have their season like everything else on the planet. Something will shortly replace them in the cityscape.

The haiku are extracts from Avery’s diary much in the tradition of 17th century haiku master Matsuo Basho, who documented his 17-syllable observations about the passing of seasons, his travels on foot, and his life in the form of a daily haiku. Avery begins her diary on December 31, 2010, with the sighting of a roach. The first deed of the new year is to kill that roach, an ominous beginning suggesting urban squalor, darkness, and death.

There is nonetheless urban beauty to be found in January, its golden evening light, the snow, and (how is it possible?) hummingbirds. February is hard on ducks, snowmen, drivers. March presents a distinct turning point in which the poet cites nuclear meltdown in Japan, the radiation in tap water and food. Yet she perceives the persistence of birds to nest and flowers and trees to bloom. The haiku continue with mingled images of nature’s destructiveness and rebounding despite insults caused by humans (a forsythia growing from a plastic U.S. Mail bin).

In June while Avery is in Africa her mother dies. The poetry here becomes more personal and poignant. Though still maintaining the characteristic detachment of haiku, they evoke emotion. Some of my favorites are about this human loss.

11. Sunset. An elephant crosses the Zambezi. My mother is dying.

12. Night. Listening for the tiny frogs my mother loved. She is dead.

15. The power goes out. The moon slides out of its eclipse to light our way.

30. Florida. An ad she kept twenty years, for a man who fixed old things.

In July the tone becomes more upbeat. Nature is coming back and so is the poet. September is the month of harvest—apples and honey. October and November, the shortened days and cold. By December there is a noticeable shift in attitude from the year’s beginning. Despite the natural and personal disasters she encountered in 2011, the poet expresses renewed optimism, finds hope in the frogs’ two-note song. Her closing haiku for the year harks back to her mother:

31. Wish you were alive to ask, “Are you girls making soufflé for New Year’s?”

Soufflée, French for breath, implicit in life. Broken Rooms is about loss, death, and struggle for survival of the human race and nature, which coexist and persist against the odds.

The reader who is new to haiku should be aware that the form seldom uses adjectives and adverbs, metaphors and rhyme, which many people were taught in school to equate with poetry.  The language is direct and natural; the phrasing is that of ordinary speech. On the surface, haiku may not seem to be saying much at all but with repeated readings they reveal their power. In Broken Rooms we have a haiku sequence of simple, unpretentious beauty that brings into focus the human condition, its relationship to the seasons, the dying and rebirth.